Viruses utilize various host factors expressed in host cells when they replicate themselves. KinoPharma works towards the development of new antivirals with a novel concept, targeting host factors rather than virus factors.
This strategy enables to treat viral disorders which have no drug nor vaccine, as well as those with resistance to existing antiviral drugs. In addition, the drug candidates created from the idea will be effective against a wide range of virus species.

This strategy is bearing fruit in the development of an antiviral against the human papillomavirus (HPV), which causes cervical cancer. There are still no effective antiviral drugs approved for HPV. There are many types of HPV, and more than 10 types of high-risk HPV are known to cause cervical cancer. The HPV vaccine that has been used for more than 10 years only protects against two of these types, and the newly approved HPV vaccine only protects against seven of these types. KinoPharma's antiviral medicine effectively suppresses the multiplication of all high-risk HPV types.

What is a virus?

A virus is a simple microstructure consisting of a "capsid" and "nucleic acid" contained inside. A virus infects other organisms (hosts) and utilize the proliferation mechanism of the host to replicate itself.
Through the replication of viruses, host cells may lead to deaths or cancers, and the host may suffer a variety of disorders. 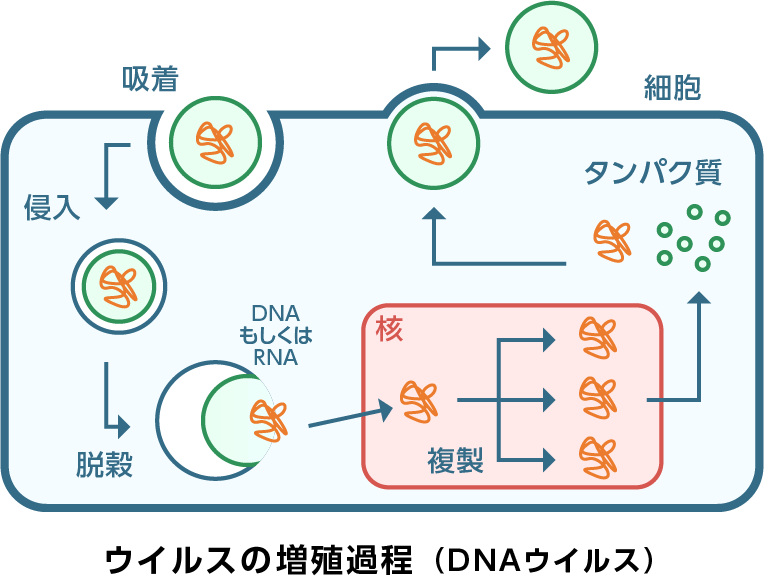 KinoPharma is pursuing antiviral drug programs against each of the two categories (DNA and RNA viruses) with a new concept that targets the human host factors that viruses need during replication. 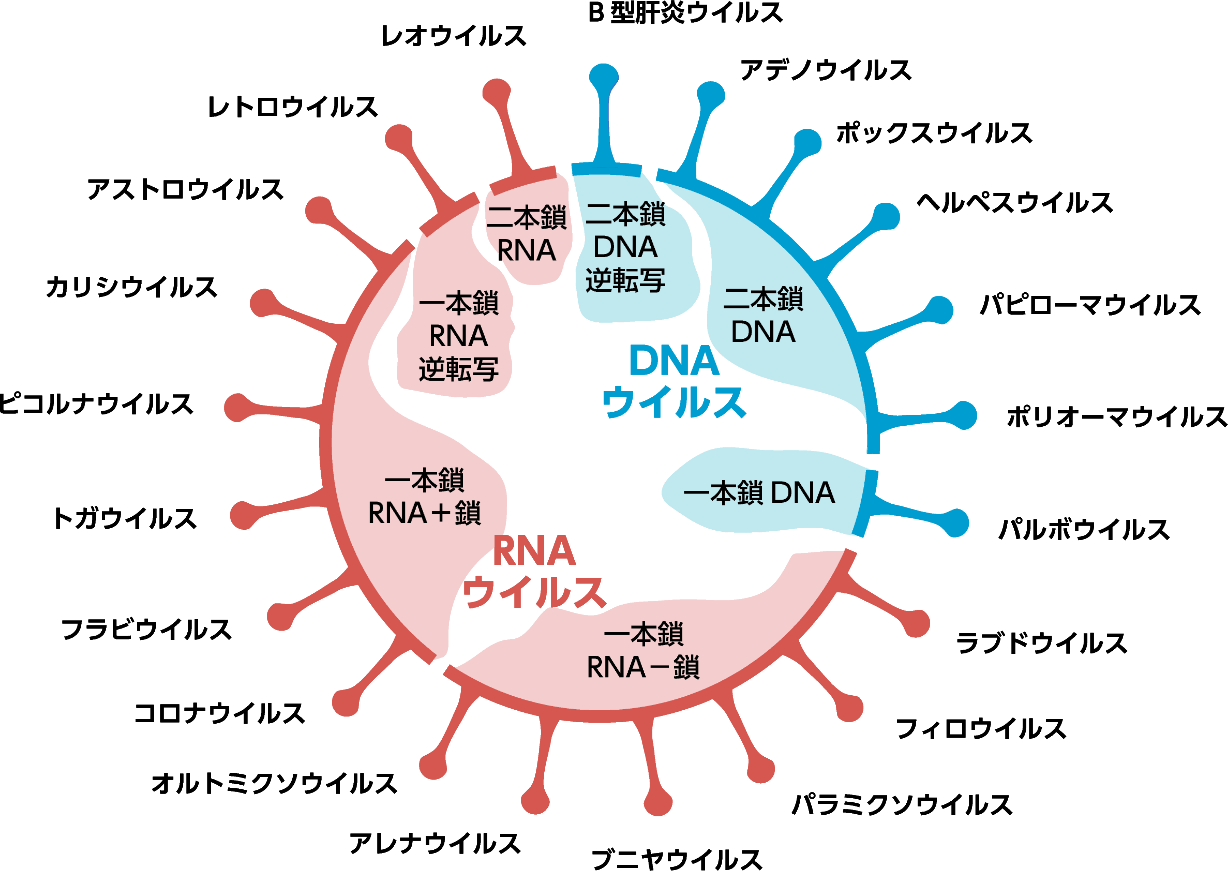 DNA viruses cause a wide range of disorders, yet there are still many diseases for which there are no effective medicines, and we are focusing our development efforts to address this serious unmet needs.

KinoPharm's anti-DNA viral drugs inhibit host enzymes used by the virus during replication and suppress their activity, thereby suppressing the growth of the virus.

The fight against pandemics and mutant outbreaks

An RNA virus is a virus that has RNA as its genome. Virus RNA replication is characterized by a high tendency to mutate because the replication error checking mechanism, which is present in DNA replication, is not functional. In humans as well as bats, pigs, and chickens, the risk of mutation is increased when the virus is transmitted between different species or species to other hosts. In addition, conventional antiviral drugs that directly target viral proteins are known to cause mutations at a certain level of probability upon their administration, which is associated with the risk of developing drug-resistant viruses to those antiviral drugs. At KinoPharma, we are developing a new therapeutic agent that is less likely to cause drug resistance due to viral mutations and is effective against a wide range of RNA viruses by targeting the host factors that play a role in the mechanism of viral proliferation, which are common to most RNA viruses.

Unlike host cell genes, single-stranded RNA viruses such as coronaviruses replicate and express viral genes only in the cytoplasm. That is, they multiply through complex processes, such as replication of viral RNA and construction of viral particles, which do not exist in non-infected cells. It is becoming clear that single-stranded RNA viruses establish a platform for viral replication in the cytoplasm in the early stages of infection in order to efficiently produce mature viruses.

As an original concept, KinoPharma is pursuing research and development of anti-RNA virus agents that do not produce mature virus particles and inhibit the site of virus replication, or in other words, "virus production plant inhibitors. The new inhibitors will be effective in the treatment of not only coronaviruses (SARS-Cov-2) but also pandemics caused by RNA viruses, which are at risk for future outbreaks.

Development of drugs for neurodegenerative disorders

Down's syndrome is a congenital disorder that is caused by a trisomy of chromosome 21. Symptoms are characterized by delayed physical development, characteristic facial features, and mild intellectual impairment. It is also known to cause a high rate of Alzheimer's disease after the age of 40.

Based on the analysis of this trisomy on chromosome 21, KinoPharma is developing drugs that target the Dyrk1a gene in the Down syndrome critical region for the treatment of neurodegenerative diseases.

The underlying cause of Alzheimer's disease is not yet understood, and research and development is being conducted from multiple approaches.
Based on the hypothesis that the cause is aggregation and deposition of amyloid-β (Aβ), a number of "Aβ-targeted drugs" have been developed.
In clinical trials, the improvement in cognitive function has not been as great as expected, and some candidate agents have been discontinued in development.
In such a situation, it was found that the "neurofibrillary tangles" in the hyperphosphorylated tau aggregates correlate with actual neuronal dropout, and tau protein has been gaining attention as a potential therapeutic target for Alzheimer's disease. 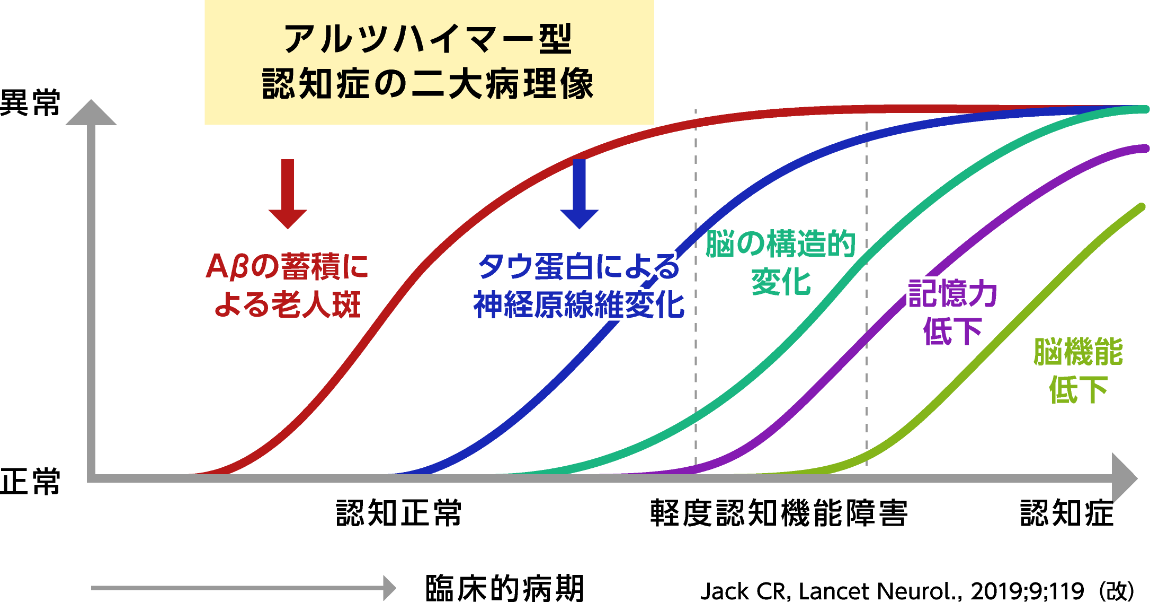 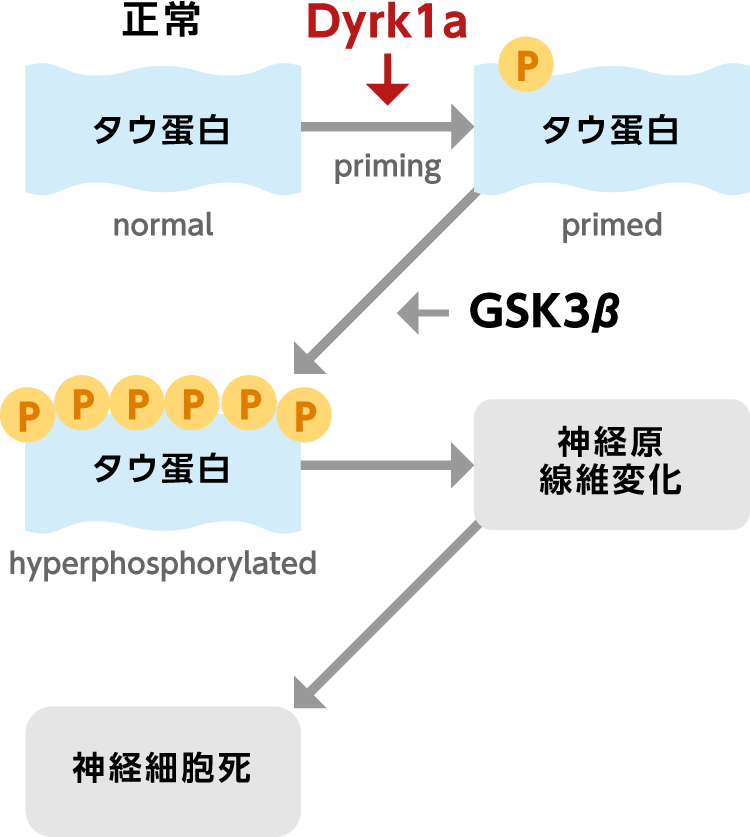 A Spanish research group has published findings from a Phase 2 clinical trial showing that a green tea extract (with Dyrk1a inhibitory properties) improves cognitive function in patients with Down syndrome. KinoPharma plans to conduct clinical trials of its candidate compounds with higher potency in Down syndrome and Alzheimer's disease.